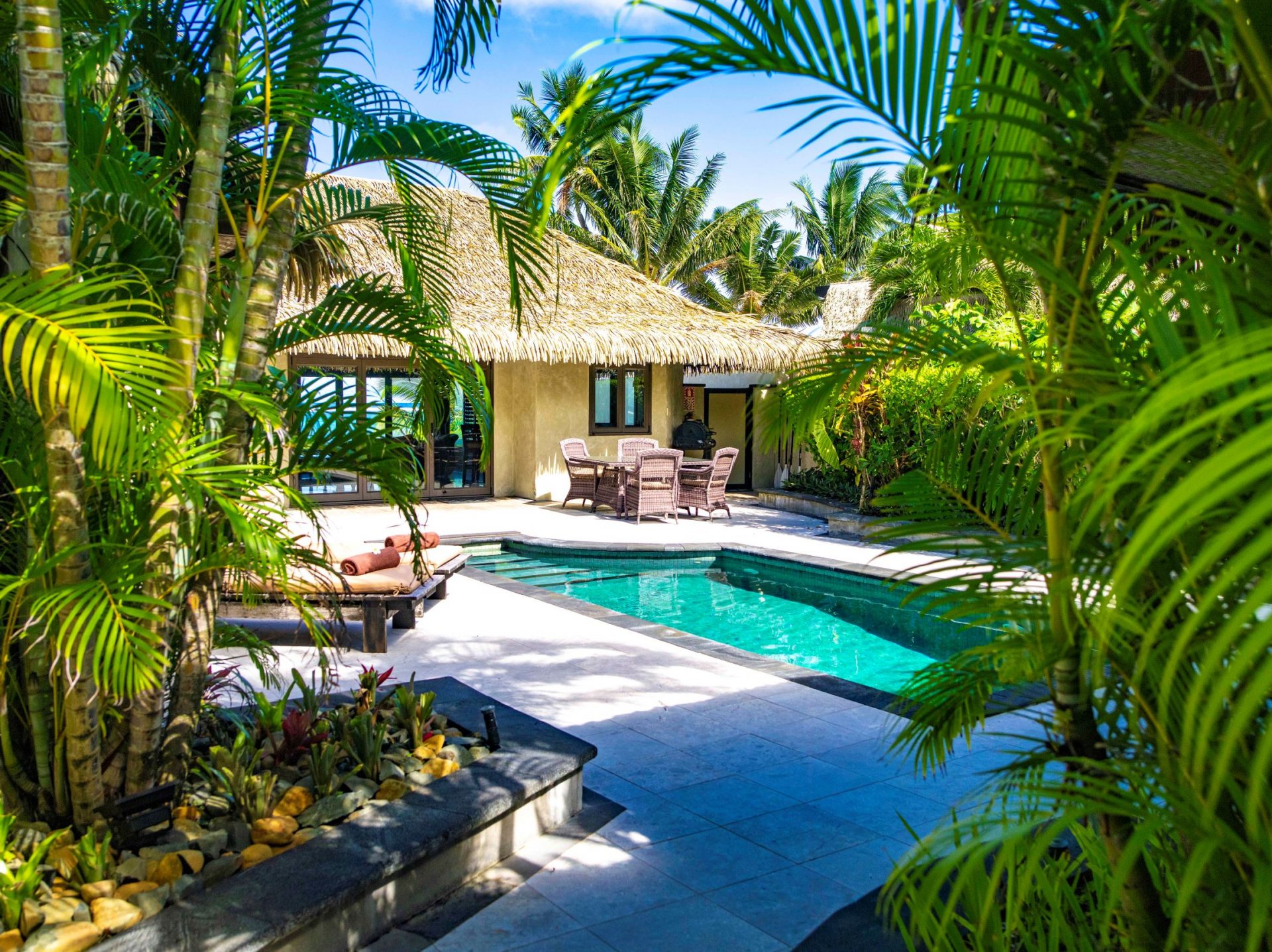 When Fine Travel Consultant Meghan Ward welcomed her client home after his holiday in Rarotonga and asked for feedback on his time away, she received such a comprehensive response we thought we’d share it with you.  Thank you to Hayden for his permission to publish his feedback. (Image courtesy of David Kirkland Photography).

Overall it was great. It was fortunate that we had five nights there, because we had 30kmph winds for the first three days, which spoiled most activities (very choppy water, quite cold, poor water clarity, etc.).

Fortunately, that’s where the villa came into its own. All the villas are very private, and the courtyards containing the pools are walled off, creating a very sound windbreak. So we were able to sit in that sun-trap and use the plunge pool (which was actually quite large) quite happily, which was great.

More generally, Te Manava was superb – easily one of the best (if not the best) place we’ve stayed in the tropics. It was about 15-20 minutes’ drive from the airport and shares the same driveway as Rumours (they’re on the same site, weirdly). There’s a liquor store and a convenience store right across the street, which is handy.

Something to be aware of is that Pacific Resort isn’t really within walking distance – it’s about 3 minute drive away. More generally, you really do need some kind of transport when you’re there. A car is a better idea than a scooter, since it’s easier to lug around groceries, picnic gear, etc.

In terms of the specifics, there are only 11 or 12 villas on the resort and they’re all private little enclaves. As I said, each is walled off with a lockable external door/gate. The two-bedroom pool villa we were in was spacious, modern and extremely well laid out. The appliances were high-spec (Bosch washing machine, F&P dish drawer, Bluetooth audio player, etc.) and everything worked. 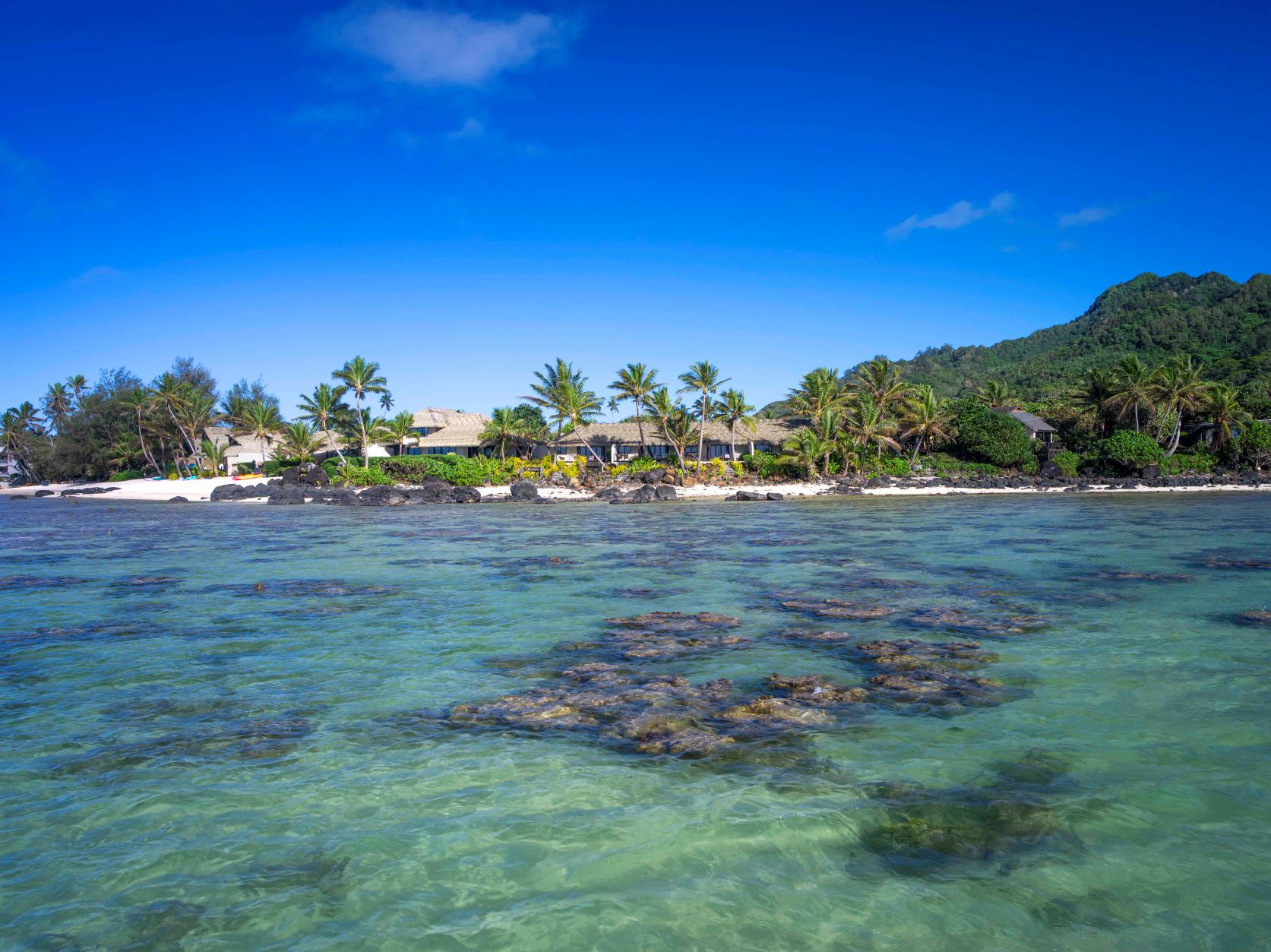 Not being on the beach wasn’t an issue at all – there’s a walkway about 25m from the villa that goes straight down to the beach. We actually didn’t use the beach at the resort all that much. Frankly, it’s not that great. Unless you’re swimming at high tide it’s too rocky. We tended instead to drive about 10 minutes’ up the road to Aroa beach, which was sandier and considerably nicer (in our opinion anyway). That’s not to say the beach wasn’t nice – it was, and it’s good for kayaking – just not so much swimming (image courtesy of David Kirkland Photography).

(FYI, we had a quick look around the 3-bedroom pool villa as we were leaving and it was noticeably older and not quite as nice – I suspect these were the original rooms and the others have been added subsequently. It was still nice, but not as good as the two-bedroom ones and the beachfront villas.)

We paid $50 for 15GB of wifi at the resort, and that worked really well. But it’s not free wifi, which some people might fail to recognise beforehand (there are cheaper increments available for less). Each of the flat screen TVs also had USB sticks in them that contained a good selection of kids and adults movies, which would be good for rainy/windy days. Note that the 3 bedroom pool villas’ rooms didn’t have TVs (and the kitchen – and kitchen appliances – were much more dated).

In terms of the island more broadly, there were quite a few places still closed – but it seemed like most businesses and restaurants were open. There were plenty of stalls at the big Saturday market, and the place was humming. It took an absolute age to get through the airport – over 90 minutes – which wasn’t ideal! Still, it could have been worse – we were originally booked on the flight that got turned back because of 90kmph cross-winds until I asked you to change it to the earlier one at the last minute. Thank goodness for that!

So, all-in-all, it was a great holiday. We’d definitely return to Raro and, if we did, we’d almost certainly stay in the same place.