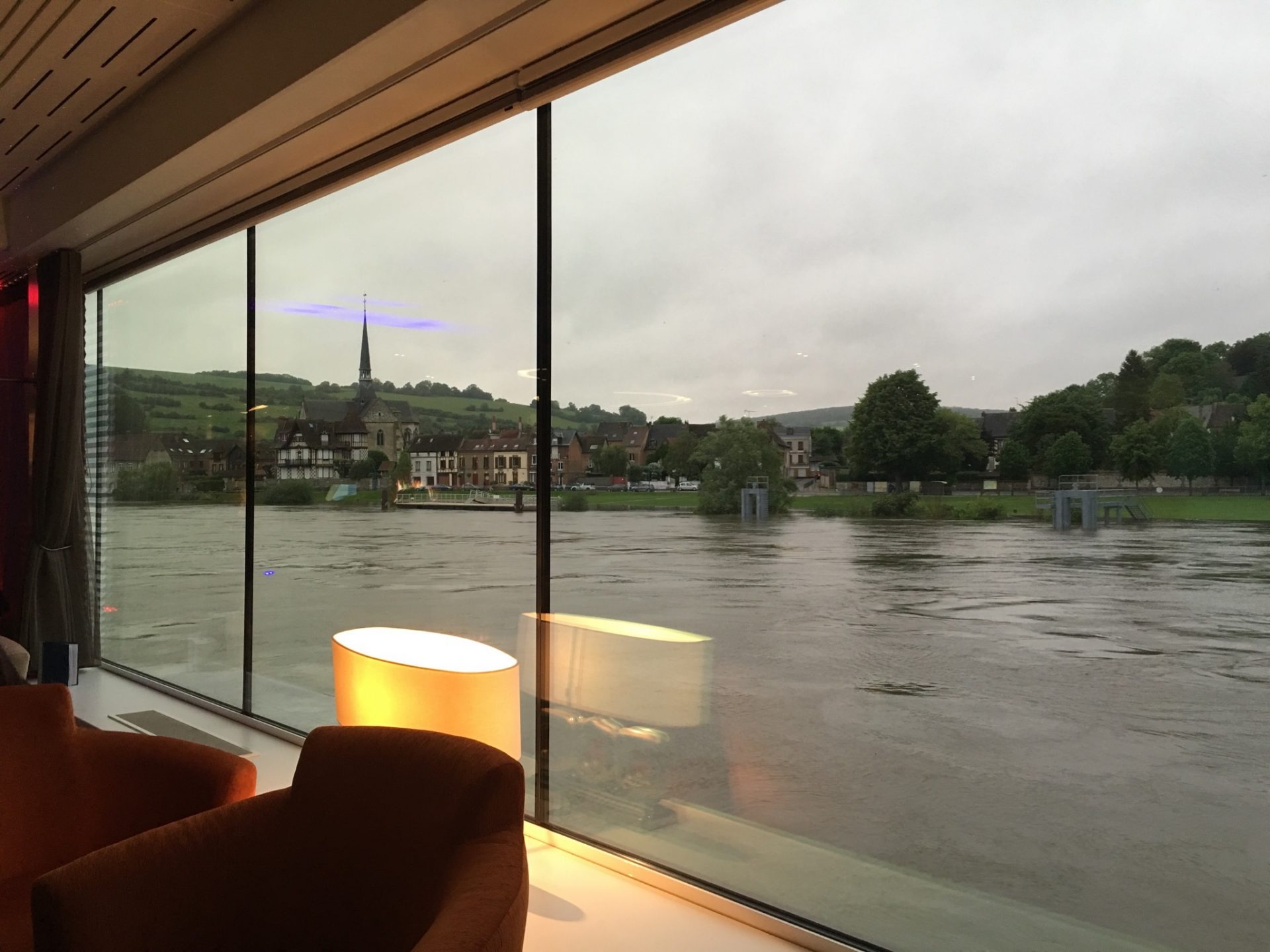 I had formed a very favourable opinion of the concept of River Cruising but the reality exceeded my expectations.  The concept is that you have a purpose made vessel that is like a small luxury hotel, staffed by a crew of sailors (captain, engineer, deckhands) plus hotel personnel (manager, chef, waiters, reception, housekeepers) that work together for your comfort and safety.  There is also the Cruise Director who manages the day to day itinerary (daily oral and written briefings, shore excursions, on board presentations, evening entertainment).

The journey is on a river that has been used for centuries for trade, invasions, fishing, irrigation, serenading. In other words, the journey has a rich history that is shared along the way.

So you have the concept and journey but how was the delivery?

Our cruise was as paying passengers on an Avalon Waterways 7 night Paris to Normandy and return on the River Seine.  We flew to Paris with Singapore Airlines and the meeting point on day one was the Pullman Hotel.  The Cruise Director introduced herself and gave the first briefing in a very welcoming, professional manner that set the tone for the next 8 days.  From there we were coached to our vessel – The Tapestry II (pictured below on a wet Paris day in 2016).

Each of the 77 passengers were greeted as we left the coach and invited on-board.  My first impression was that you we were entering a small boutique hotel that was new, fresh and manned by smiling staff in smart white nautical uniforms.  We had our keys from the hotel briefing so we were soon in our suites.

The suites were surprisingly generous in size with the bed facing the view out the full length windows (internal balcony in front of a ranch slider style that can be opened).  There was a chair and desk at the end of the bed and a settee on the side.  Plenty of cupboard room and drawers for clothes to unpack, and the bathroom and shower was not claustrophobic at all.

As many of my clients have said, “you don’t spend much time in your room” and they were quite right. The public areas at the front are the reception through to the lounge and the dining room is a level down.  At the rear there is a small lounge that has coffee, tea and snack food which we used as a venue to sample the delicious French confectionery purchased along the way. The vessel isn’t large so all the public areas are easily accessible including the sundeck at the top.

Getting underway is what we all looked forward to and sitting in the comfortable lounge with a welcome drink and no sense of motion, other than the passing banks on either side. It was very relaxing. This was also the time to gauge whether you had packed the correct attire, and if your fellow passengers were “Yahoo Henrys” or seekers of fine bonhomie. The answer was they also had smart casual and ages ranged from 20’s to a couple who were 97.  Most were late 50’s 60’s, very much into fine bonhomie, from Australia, Canada, USA, South Africa and we made up the NZ contingent. 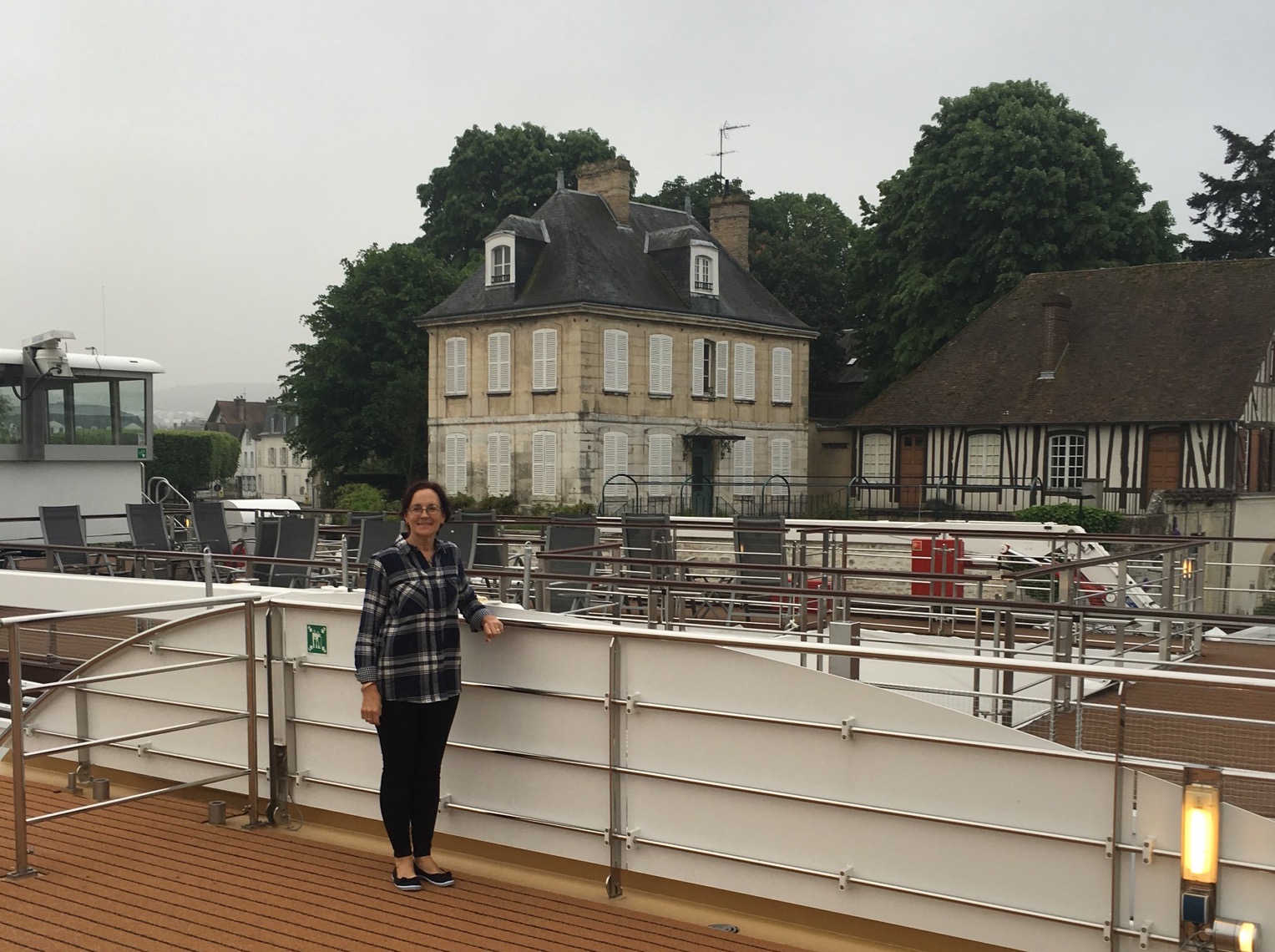 The next day’s itinerary is covered in the daily briefing as well as a written copy left on your bed at turndown.  Communication by the Cruise Director was spot on and you never felt you had to rush.  Each shore excursion had a professional guide who was local and passionate about their subject.

The meals are all included as is wine and beer during dinner.  Lunch and dinner is a silver service style and has set menu which changed daily, with three choices of entrée, main and dessert.  All were superb, with waiting staff that are attentive and not lacking humour.

The last three days were thrown into disarray due our inability to get back to Paris along the flooded Seine (a Cruise Director’s nightmare).  Sylvia came up with a ‘plan B’ which quickly changed to a ‘plan C’. Instead of spending the last two night’s on-board in Paris we were coached via The Palace of Versailles to Paris and put up in a 5 star hotel near the Champs Elysees.  All meals and excursions were covered and Sylvia received a standing ovation from all passengers.

Yes, a river cruise ticks a lot of boxes and Avalon Waterways is in the “highly recommended” category to discuss with your Fine Travel Consultant.